Are biofuels and e-fuels the only sustainable solution to power our existing fleet of internal combustion engines? - Coryton

We’ve used hydrocarbon energy generated by plants since mankind began. Burning a woodfire is the oldest known form of hydrocarbon energy conversion. A growing global population and limited use of fertile land for food production, makes us more aware of being careful using our land for energy production. Our current biofuel (biodiesel and ethanol for gasoline) production was predominantly based on crop production. Corn, sugarcane, soybeans, palm oil, rapeseed oil were the most known energy sources for our biofuels for decades. These are known as 1st generation biofuels.

This is now going to change!

Fertile land shouldn’t be used for our energy production. Food production and creating a healthy living environment should be the most important use of our land.

We’re finally finding ways to use the energy otherwise wasted, by rotting biological waste or decomposing hydrocarbons in our wastewater treatment plants. Energy production from waste, or so called 2nd generation biofuels, have to become the standard when it comes to producing sustainable fuels.

Can we do even more to reduce our fossil fuel use and use non-recyclable waste?

We do produce more and more waste which seems to have no value to us anymore. We’re stockpiling waste tyres and contaminating our nature and oceans with tons of waste plastic for example. New technologies even enable us now to keep our environments clean and reuse the energy captured in hard to recycle products we consider as waste.

Waste plastic and waste tire conversion to oil and fuel.

Recent developments enable hard to recycle plastic and tyres to be shredded and pyrolyzed in a dedicated reactor to form gas, oil, carbon black and steel wire. The produced gas is then being used to power the reactor. The pyrolysis oil can be converted and or separated into valuable sources of gasoline and diesel streams. Carbon black and steel wire are valuable by-products.

How does the pyrolysis work?

Pyrolysis is the breaking of organic chemical bonds in a closed heated system without oxygen. The reactor is heated up to 400 °C to break the hydrocarbon bonds of the large molecules and form smaller molecules in the fuel range. The pyrolytic gas being formed is reused in the system to fire the reactor. Pyrolytic oil vapor formed is liquified by passing through a relatively simple distillation process to separate the valuable fractions, light naphtha in the gasoline range and a heavier fraction in the diesel fuel range. 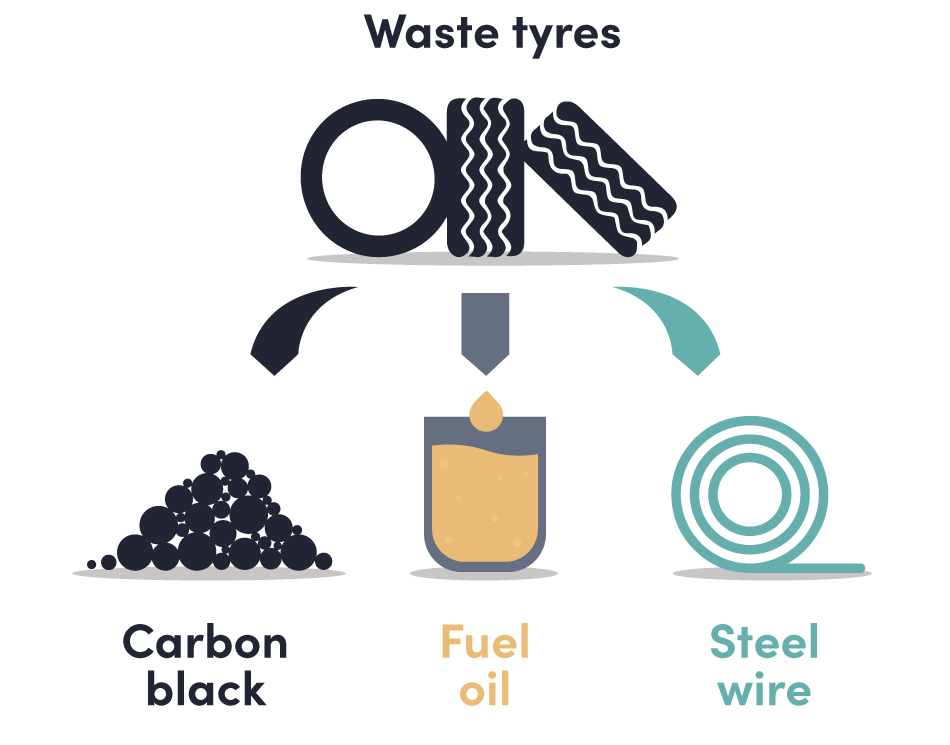 The most difficult part of the process is the removal of impurities found in the waste streams. Sulphur and Chloride are 2 of the main undesirable impurities which need to be removed before use in other applications. The use of a unique catalyst in the pyrolysis reactor is the differentiating factor determining the quality due to the level of impurities remaining in the end product.

The use of waste tire and plastics as fuel to save on fossil fuels.

There are several initiatives already where waste to fuel is being successfully used to power internal combustion engines significantly reducing the use of fossil fuels.

However, despite these waste tyres and plastic converted fuels are significantly reducing the use of fossil fuel use, the current fuel industry is not classifying these energy sources as sustainable fuels. They are currently classified as circular economy products and therefore the desire to use the oil in the chemical industry is preferred.

At Coryton, we firmly believe any method of fuel production that reduces environmental impact of the production process or makes use of waste that would otherwise be thrown away is worth pursuing.

We’re using several different sources and qualities of waste-to-fuel solutions in order to help our customers select and test the best products for their applications. Don’t hesitate to get in touch for more information.

What Are The Technical Requirement Of Fuels?